The film does still manage to pack some fun into its nearly 2 ½ hour run time, the fights are especially rewarding as they finally feel like they capture the essence of the comic book version of spidey, and the set-up leading into the follow up film to feature the Sinister Six leads to an intriguing premise behind that nefarious group. Adding in Paul Giamati’s inclusion and introduction as The Rhino, the film is filled with way too much material here, enough for 2 separate films, but at least the screenwriters found a way to make the multiple villains set up too unbearable, this is much better than the botched Spiderman 3.

Ultimately The Amazing Spider-man 2 is unlikely to create any converts to this reboot of the franchise with this second entry, but the film will make fans of this incarnation happy. The 2 lead performances are the highlight of the film and Garfield gets to show some real emotion in the final act of this film, a very adept adaptation of a now infamous sequence from the comics. The Amazing Spider-man 2 is more like the ‘slightly more than adequate Spider-man’, notable steps below “Captain America: The Winter Soldier”, and may be overshadowed by the other big comic book movie still to come in 2014. 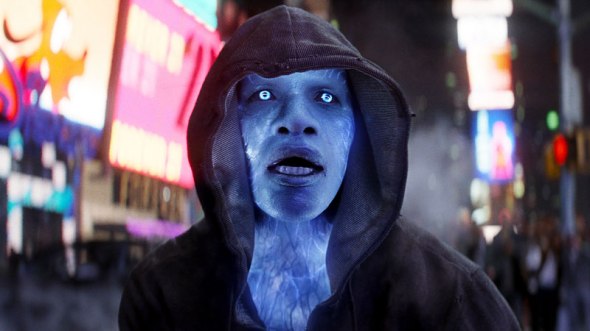 This entry was posted on May 2, 2014 by moviejunkieto. It was filed under Reviews, Theatrical and was tagged with Andrew Garfield, Chris Cooper, Emma Stone, Jamie Foxx, Mark Webb, Marvel, Paul Giamatti, The Amazing Spider-Man 2.