Tonight as part of TIFF’s Free Screen program TIFF brings a unique night with an equally unique documentarian, James Benning, with a screening of Gabe Klinger’s film on Benning and his 30 year old friendship with director Richard Linklater “Double Play: James Benning and Richard Linklater”. Double Play won the Best Documentary on Cinema Award at the 2013 Venice International Film Festival and screens with Benning and Klinger in attendance to discuss the film and some of Benning’s seminal work.

Benning and Linklater couldn’t be 2 more opposite filmmakers; Benning is a documentarian in the Cinéma Vérité mold that rarely breaks the camera’s concentration whereas Linklater has experimented with his camera quite a few times with films like “Waking Life” and “A Scanner Darkly”. The pair met 30 years ago when Linklater made Benning the first guest at Linklater’s then newly established Austin Film Society (founded a year before the release of Linklater’s Slacker). But with Linklater’s newest film “Boyhood”, Klinger brings the pair together on camera to discuss the similarities between Boyhood and Benning’s works.

After the screening of Double Play, starting at 6:30, the evening will be topped off with a screening of 2 of Benning’s works as the director himself will be back to introduce American Dreams (lost and found), the film that most closely resembles/inspires comparison to Linklater’s Boyhood, and the short Chicago Loop which are both being presented on newly restored 35mm prints.

Tickets are being handed out on a first come/first served basis tonight, August 23rd, at the TIFF Bell Lightbox box office starting at 4:30 pm.

Now on Blu ray and DVD, Disney’s “Muppets Most Wanted” sees the entire Muppets gang embarking on a global tour that includes Berlin, Madrid, Dublin and London. But, as usual, mayhem follows the Muppets as they find themselves unwittingly entangled in an international crime caper to stela the crown jewels. This nefarious plot is headed by Constantine—the World’s Number One Criminal and a dead ringer for Kermit—and his dastardly sidekick Dominic (Ricky Gervais). Meanwhile, Kermit is detained behind bars by Nadya (Tina Fey), as Ty Burrell tracks all the shenanigans as Interpol agent Jean Pierre Napoleon.

Back in 2011, Jason Segel teamed up with writer Nicolas Stoller, songwriter Bret McKenzie and director James Bobin to reintroduce the Muppets to a new generation, while showing audiences who grew up on them exactly why they loved them as much as they had as children. The sequel brings back everyone minus Segel, which sadly leaves Muppets Most Wanted without a heart to its story, reducing the follow up to a series of sketches and cameos strung together with a threadbare plot that feels like The Muppets reimagined with a Family Guy mentality. To top it off the lovable Walter who was at the center of the previous film has been relegated to a ‘barely existing’ supporting role, something the film itself actually calls out.

END_OF_DOCUMENT_TOKEN_TO_BE_REPLACED

After being set up as the cause of a terrible accident in a street race driver, causing the death of his friend after a fiery crash on a bridge, Tobey Marshall (Aaron Paul), a financially struggling custom-car builder and street-racer, spends two years in jail obsessed with gaining justice and revenge. Upon his release he borrows the fastest car his workshop ever built and sold, with a passenger Julia (Imogen Poots) in tow, and sets out to enter a secretive and extremely high-stakes race known as The DeLeon. As it just so happens the reigning and defending champion of the Deleon, Dino Brewster (Dominic Cooper), is also the other racer who was on that bridge that fateful day.

Straight off the final season of the hugely successful series “Breaking Bad” Aaron Paul lands his biggest leading man role to date with “Need for Speed”, and he certainly seems to be the man for the job. Need for Speed looks to win over the ‘gearhead’ crowd, an audience that has been dissatisfied with the new caper style film that the “Fast and Furious” franchise has leaned towards, by filling Need for Speed with some of the fastest and insanely expensive cars available. Furthermore, as a stark contrast to the Fast films all of the driving and crashes are shot practically, without the aid of digital effects, as director Scott Waugh has assembled perhaps one of the greatest stunt driving teams ever. The work pays off on screen as the stunt work looks fantastic and the film carries a throwback feel that harkens back to the work of legendary stunt co-ordinator/director Hal Needham. 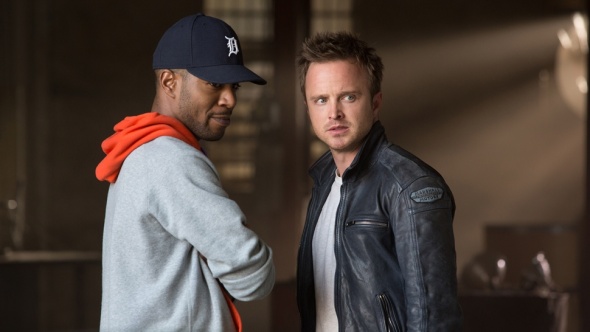 END_OF_DOCUMENT_TOKEN_TO_BE_REPLACED

CONTEST!!! Win a copy of Five Dances on DVD! 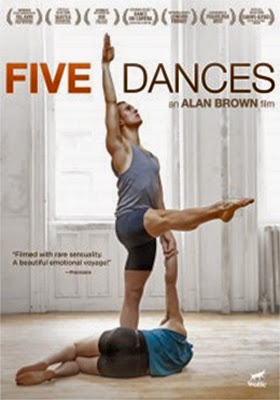 Well its contest time again here at the Fix and this time we have a dance based coming of age drama from our friends at Wolfe Video, Five Dances. The recently released film uses 5 dancers with limited acting experience to film some visually stunning choreography and thanks to Wolfe we have 4 copies on DVD to giveaway.

The coming of age tale of an extraordinarily gifted young dancer recently arrived in New York City, FIVE DANCES is a visually sensual glimpse of life and first love in the downtown contemporary dance world. Shooting mostly in and around a Sohodance studio, with original dance by the internationally renowned choreographer Jonah Bokaer, writer/director Alan Brown (Private Romeo, Superheroes, Book of Love) and his cast of five of New York’s most talented dancers capture the emotional turbulence and creative excitement of a small dance company during the process of creation. Five Dances has a runtime of 83 minutes and is not rated.

Fans of dance and strong choreography, with or without the LGBT angle, are sure to enjoy this film from director Alan Brown. Here’s how to enter, it’s simple!

Winners will be picked and notified via twitter after the contest closing date of  Aug 16th 2014!

Contest is open to readers from Canada and the United States only. Decision of the editor is final.

Hurry up and enter! Good Luck to all. Movie Junkie TO

Anchor Bay Entertainment brings 2 new action/thrillers from some of Hollywood’s newest action stars to home video with “Fast Five” and MMA star Gina Carano’s “In the Blood” and “Game of Thrones” and “Conan” (the remake) star Jason Momoa’s Road to Paloma. Both films back up our stars with recognizable supporting casts and promise a lot of action, but can they deliver a story beyond the fists? 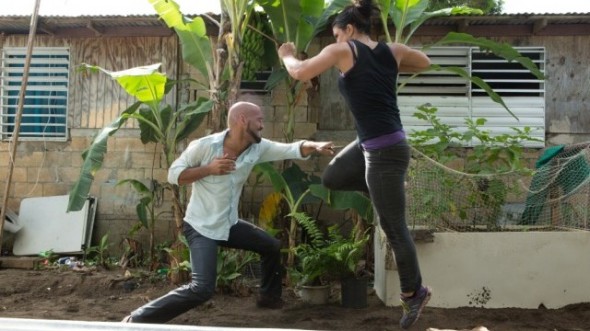 “In The Blood” marks the second time Gina Carano has been the main star of a film after headlining the Steven Soderbergh 2011 film “Haywire” and Carano seems to be finding her niche in front of the camera. A no nonsense type of girl with a violent past, raised by a survival fanatic father played by “Avatar’s” Stephen Lang, Carano’s Ava is not afraid to let her fists do the talking, much to the surprise of her newlywed husband (Cam Gigandet). After her husband disappears, she goes on a one woman crusade to find his whereabouts, breaking 100’s of body parts along the way.

In the Blood is a fun action film, with some ridiculous twists and some very sloppy writing at parts that gets sillier as the film goes along, but is filled with some top notch fighting. Add in genre legends Danny Trejo, Treat Williams and Luis Guzman for supporting roles with “Prison Breaks’s” Amaury Nolasco as the picture’s big baddie and what results is a fun romp through the Caribbean. Carano’s leads the film with a confidence that was only evident in parts of Haywire, showing that she may be developing into the kick ass leading female action star Hollywood has wished she could be. The disc contains only 1 small special feature but the action is shot very well and the story never wains, and at around $20 new, In the Blood is a fairly solid investment.

“Road to Paloma” carries more of a personal investment for star Momoa in that he co-wrote, with co-star Robert Homer Mollohan, and made the film his directorial debut. The story of a Native American known simply as Wolf, who sought his own brand of justice after the murder of his mother, and his winding trip through native land to say goodbye to all he loves while being tracked by a vicious FBI agent, only concerned with bringing him down.

Also featuring a stellar supporting cast that includes Wes Studi as his father, Sarah Shahi as his sister, real life wife Lisa Bonet as a love interest and Timothy V. Murphy as the man tracking him down, Road to Paloma packs a more dramatic punch than what would be first expected. The action sequnces are few and far between in what becomes a more brooding and desperate trip across country in desperate attempt to disappear into the back country. Momoa does a decent job with the dramatic endeavours, helped greatly by his supporting cast, minus a flighty and uneven performance from co-writer Mollohan, as Bonet, Shahi, Murphy and Micheal Raymond-James as Wolf’s brother-in-law all deliver excellent performances. Momoa’s is a smart enough director to frame the action that does happen well and use the strong supporting characters to do the heavy lifting. The disc also only carries 1 special feature, but the film is a solid directorial debut that is worth the effort in the end.