‘Junkie’ comes up short on DVD 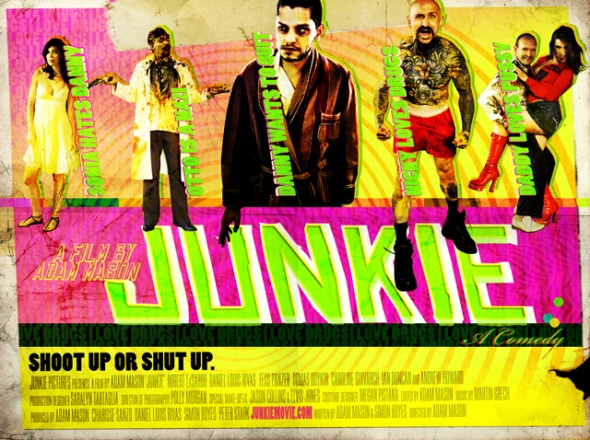 “Junkie” is a pitch black comedy about two heavily addicted, drug addled brothers, Danny (Daniel Louis Rivas) and Nicky (Robert LaSardo). When Danny decides he’s going clean, Nicky reacts aggressively, driving Danny from one insane experience to another. As Danny’s life spirals out of control he must fight tooth and nail to kick the habit and rescue himself from the personal hell Nicky has consigned him to, whilst simultaneously attempting to repair the deeply damaged relationships with his bizarre set of friends and family.

Junkie is a bit of a mess of a film doesn’t quite get cleaned up by the end. The film starts with a very inventive title sequence that is immediately negated by a story that plays like a very poor man’s take on David Fincher’s Fight Club. In fact the entire first half of the just over 80

This entry was posted on January 16, 2014 by moviejunkieto. It was filed under Home Entertainment, Reviews and was tagged with Adam Mason, Andrew Howard, Daniel Louis Rivas, DVD, Indiecan, Junkie, Robert LaSardo.