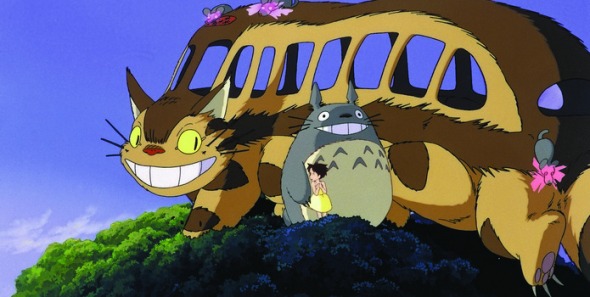 Starting this weekend at the TIFF Bell Lightbox and running through January 3rd with the retrospective program Spirited Away: The Films of Studio Ghibli. The expansive 18 film showcase covers the almost the entire lineup of Ghibli films and even boasts screenings of the rarely seen in Canada masterpiece Grave of the Firelflies.

The film that carries the most screenings in the series is also perhaps the most cherished of the entire Ghibli cannon and serves as the logo for the entire series, My Neighbor Totoro. Totoro is a brilliant and insightful film that cemented what has become a signature of director Hayao Miyazaki and the rest of team Ghibli in presenting a  frank and earnest depiction of real children facing real problems without pandering or playing down to the audience. The young sisters Satsuki and Mei are dealing with their move to the countryside outside of Tokyo and the illness of their mother who is bedridden in the hospital. Through the mischievous Mei’s curiosity the kids discover that their neighbor is a giant Totoro (a giant furry creature that has become one of Miyazaki’s most beloved creations) who lives in the forest beside them. Totoro is just as loveable today as when he debuted in 1988 and the film has lost none of its charm and as it remains just as viable and identifiable today as always.

Of the other films in the series, the absolute can’t miss standouts include the gorgeous and poetic Princess Mononoke, the most expensive, violent and ambitious project Miyazaki undertook, and the aforementioned classic of the genre Grave of the Fireflies. Fireflies remains a sheer breathtaking accomplishment of animation and the ultimate Ghibli experience for any fan. Also included in the films playing are The Cat Returns, Howl’s Moving Castle, Castle in the Sky, Porco Rosso, Ponyo, Spirited Away and Pom Poko.

For more information on the series, check out TIFF’s online schedule, which also includes details on the Totoro picture contest where you can win passes to Ghibli screenings in the series.

This entry was posted on December 15, 2013 by moviejunkieto. It was filed under Reviews, Theatrical and was tagged with Cat Returns, Ghibli, Grave of the Fireflies, Hayao Miyazaki, My Neighbor Totoro, Porco Rosso, Princess Mononoke, Spirited Away, Studio Ghibli.