Short Term 12 is much more than just one performance

Grace (Brie Larson), a young supervising staff member of a foster care facility, looks after troubled teens and reckons with her own past alongside her co-worker and long-time boyfriend, Mason (John Gallagher Jr.). But when a young girl named Jayden (Kaitlyn Dever) is admitted Grace’s past comes rushing back on her like a tidal wave. Now Grace must find a way to reach out for help, the same way she instructs her charges, in order not to drown in a despair all her own.

There has been much said about the star-making and mesmerizing performance from Larson in Short Term 12, and all of it is very well deserved indeed as her performance is stunning, but not as much has been touted about her counterpart Gallagher Jr. Just as impressive as Larson is Gallagher Jr’s understated and brilliant turn as Grace’s long suffering and devoted boyfriend Mason. The patience and understanding Mason shows even in the midst of Grace pushing him away as hard as she can is earnest and inspiring and Gallager Jr is fantastic in role. The rest of the supporting cast is strong as well, the casting is perfect here as all of them are playing to their strengths, as Stephanie Beatriz from Brooklyn Nine-Nine plays the stoic and strong Jessica and Rami Malek (the Mummy from Night at the Museum) is the doe eyed newbie Nate that sticks out like a sore thumb.  Even the kids in the home put in some solid work with Keith Stanfield as Marcus becoming a real standout.

The script is very smart and intelligently written and directed by Destin Daniel Cretton, a feature adaptation of his own short film of the same name, as he keeps most of the film in the facility itself. Short Term 12 the facility is more like a dormitory than a detention center, though the idea is to keep the kids under supervision at all times. The film starts with a bang as one of the younger charges makes a run for the street, a scene that immediately indoctrinates us and Nate into the constant struggle and level of preparedness the crew must be under. 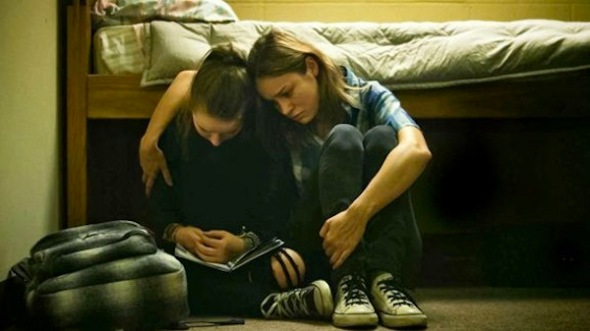 Larson will be the winner to emerge from this project, destined to have her name mentioned and considered in the upcoming award season, as she wholly encompasses the struggles and triumph of the disturbed Grace. But the film is also about the performances of her peers, which are great, and the steady and assured hand behind the camera of director Cretton. With all of these factors playing together it’s easy to see why Short Term 12 is one of the best films of the year.

Short Term 12 starts at the TIFF Bell Lightbox this weekend.