The ‘Spring Breakers’ want you in theaters this weekend

New in theaters across Canada this week from VVS Films is the tantalizing and titillating new film from “Kids” scribe Harmony Korine, the heavily buzzed about “Spring Breakers”. Starring a pair of former Disney child stars, a ‘Pretty Little Liar’ and Harmony’s own wife as bikini-clad bandits who desperately want to leave behind their humdrum college lives for sun, drugs and the allure of Spring Break. Korine has long searched for the right follow up to his landmark film “Kids” but has not quite achieved it yet. Will Spring Breakers prove to be it?

Written and Directed by Harmony Korine

Four sexy college girls, Faith (Gomez) Candy (Hudgens) Brit (Benson) and Cotty (Korine), plan to fund their spring break getaway by burglarizing a popular fast food shack. But that’s only the beginning. At a motel room rager, fun reaches its legal limit and the girls are arrested and taken to jail. Hungover and clad only in bikinis, the girls appear before a judge but are bailed out unexpectedly by Alien (Franco) An infamous local thug and rapper, Alien takes them under his wing and leads them on the wildest Spring Break trip in history. Rough on the outside but with a soft spot inside, Alien wins over the hearts of the young Spring Breakers, and leads them on a Spring Break they never could have imagined.

Spring Breakers plays out like a hypnotic fever dream, you are captured and enthralled by the striped bare and honest beginnings, you fall willingly further down the rabbit whole along with the girls as they keep getting over and over their heads deep. Though never innocent, the lengths and depths the girls find themselves in gets more dangerous as the film goes on, and once the conscience of the group leaves them others behind to return home, the moral compass of the remaining girls spirals out of control. It’s in this later third act that the film does jump off the rails as the story gets crazier and resolves itself in a bloody confrontation. The film shifts in this third act from less of a party atmosphere to a cautionary tale. 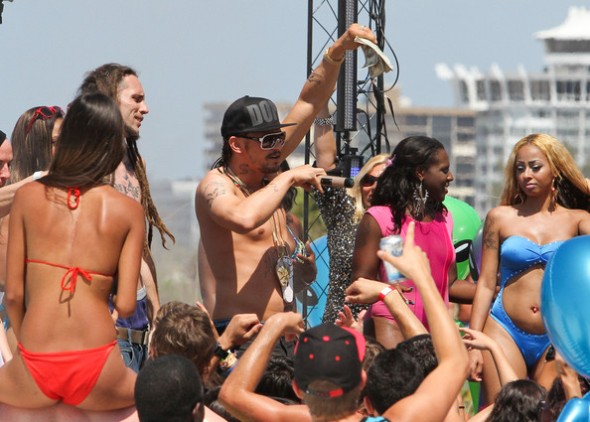 The girls are all quite strong here, which is bound to shock some, as they are not afraid to completely invest in these characters. Gomez is excellent as Faith who is still connected to her church and is the first to feel that after hooking up with Alien that the girls may be well out of their depth. Faith is the story’s heart and as the most level headed of the group she can keep the girls in some sort of check. Hudgens and Benson are the insane wild party girls that quickly change to just insane, and the pair grabs the roles with gusto. If there is a weak link in the four it would be Korine’s Cotty who seems to be ready and willing to sleep with anyone she passes when drunk. Korine is solid here, but her tendency for overacting is obvious, it just happens to work most of the time for Cotty as well. Franco’s slimy, sleazy and ‘ghetto fabulous’ Alien is spot on, though he spirals out of control with the film towards the end.

The soundtrack is excellent and the scenery fantastic. The film also oozes with sex and depravity from the insanely out of control debaucherous Spring Break hotel parties to the well covered and buzzed three way tryst in a pool. But the film devolves into a ridiculously staged first person shooter inspired ending that carries very little consequence for our girls and a drive off into the sunset. As off the rails the ending does get though, it still keeps us engaged and never out shadows the efforts and good will the film earned up until that point.

Spring Breakers will be a revelation for most. The first film of Harmony Korine’s that feels like a true follow up to “Kids” because it features characters that develop true relationships with its audience in an atmosphere where it appears they can have everything they want. Though the girls in Spring Breakers never suffer the consequences that characters in “Kids” do, the risks and stakes are higher. Spring Breakers is a definite recommend.