‘Olympus Has Fallen’ looks to overthrow theaters this weekend 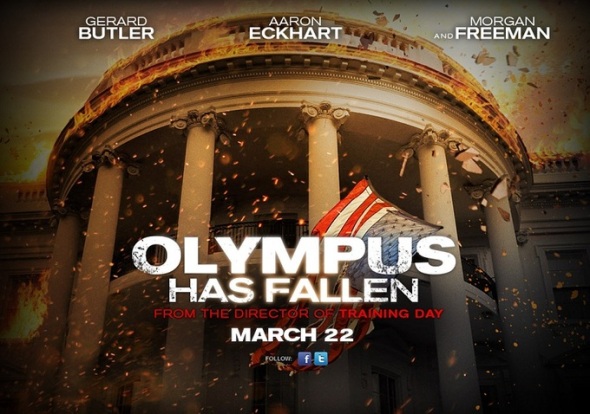 New in theaters this week across Canada from VVS Films is the newest action/thriller from Training Day director Antoine Fuqua, Olympus Has Fallen. The film is the first theatrical release from Fuqua in 4 years, since Brooklyn’s Finest, and this time around he has loaded his cast with a litany of familiar faces. So how will Olympus Has Fallen fare compared to the past works of Fuqua?

When the White House (Secret Service Code: “Olympus”) is captured by a terrorist mastermind and the President (Eckhart) is kidnapped, disgraced former Presidential guard Mike Banning (Butler) finds himself trapped within the building. The reigns of the nation fall upon the Speaker of the House (Freeman) and a room full of advisors as they assailants launch their diabolical scheme.  As the national security team scrambles to respond, they are forced to rely on Banning’s inside knowledge to help retake the White House, save the President and avert an even bigger crisis.

Olympus Has Fallen is a goofy and insanely over the top ride that does not stop until the very end. The script is pretty much a retread of the Bruce Willis classic Die Hard, but with a bigger setting and Butler playing a much better trained and prepared John McClane. The story is pretty unrealistic from the get go and the film opens with a helicopter pan across a snowy wilderness that with the music used during the pull in feels like a scene out of Red Dawn, fitting since like in the Red Dawn remake the North Koreans here play the baddies once again. Complete set pieces are lifted from Die Hard, with only minor tweaks, yet still play out in very similar ways including a rooftop sequence and a face to face sequence between Butler’s Banning and another character that is very similar to the McClane/Hans Gruber face off. In fact the only thing that is missing here is Morgan Freeman’s Speaker of the House having a craving for Twinkies.

Butler is actually pretty good here despite the films obviously ridiculous premise. This may be the vehicle he needs to get back in the limelight after a string of subpar romantic comedies and box off duds that have been following him around ever since his voice work in How to Train your Dragon. His Mike Banning is a believable bad-ass even though the circumstances surrounding him continue to get more ridiculous. Aaron Eckhart plays his President Asher exactly like a pre-Two Face Harvey Dent, full of stoicism and hero moments; Eckhart gets plenty of chances to take the higher ground. Melissa Leo takes a physical pounding here but does a decent job. We have seen Freeman do this role many times before and he manages to pull it off once more while the rest of the cast is either supporting roles or cannon fodder along the way. 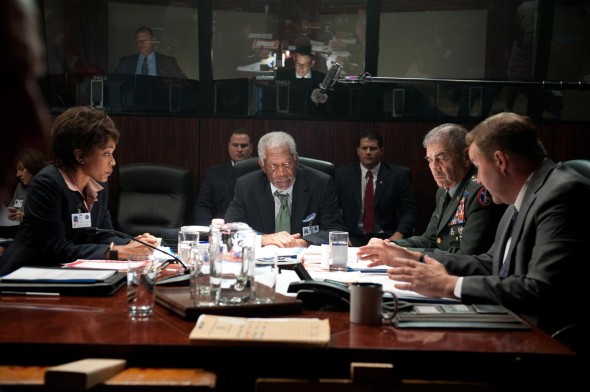 Another glaring issue comes in the use of the CGI in the film which at parts is laughably bad. These moments, a plane crash landing being the most egregious, have a tendency to make the film feel like a direct to video feature that has been slightly elevated. What the film does well is the gun fight sequences which are choreographed very well and are some of the more engaging parts of the film. The hand to hand combat sequences are effective as well, though in multiple instances you wonder why Banning doesn’t just use one of his many guns and be done with the scuffle instead of dragging out these knife fights.

Olympus Has Fallen starts with a ridiculously over the top death sequence which not only sets the story in motion but also sets the tone of the film right up front. The film gets more ludicrous as it goes along all the way up to a literal race against the clock as Fuqua throws multiple action movie tropes at us along the way. The film does manage to have a lot of fun with the audience and itself along the way as well. Movie goers looking for a brazenly bombastic time at the movies will not be disappointed, and despite the level of joy the film has in its own insanity, it is still not quite enough to recommend.