Finally making its hometown debut in Toronto at the Toronto After Dark Film Festival ‘Spotlight Screening’ tonight, an already sold out show, and then starting a theatrical run October 4th at the TIFF Bell Lightbox is the ground-breaking film “The Dirties”. The film is an insightful look at the effects of bullying on a fragile psyche and pulls no punches in its portrayal of a troubled teen losing his grip on the reality around him and the deadly results. The film does have a big fan in filmmaker Kevin Smith as he has picked it up for distribution on his Kevin Smith Movie Club label.

We’ve all known (or been) someone like aspiring filmmaker Matt Johnson (played eponymously by Matt Johnson). A hyperactive teenage fanboy who’s every engagement with the world is filtered through incessant, intertwining references to movies, TV shows, comic books and other pop-culture ephemera. Armed with his ever-present video camera, Matt enrolls his best friend Owen (Owen Williams) to make a DIY comedy about their fantasized revenge on the school bullies who regularly victimize them. But after having their ultimate ‘vision’ of the film dashed, Owen soon begins to wonder if Matt is looking to make their revenge fantasy a reality. 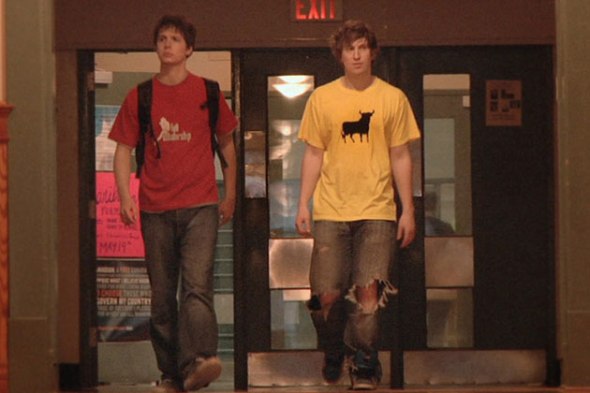 The Dirties features a tight script, solid acting and steady camera that combined delivers a powerful and thought provoking experience. Johnson proves to be very capable in the acting/directing dual role, not afraid to show his character Matt in a very unflinching and sometimes unflattering way, Johnson manages to avoid the traps that so many ‘vanity’ projects fall prey to. Williams manages to deliver a believable performance as well, though the pair are really only playing themselves onscreen without much characterization. The film looks great with a realistic sense of scope and dynamic between the characters and the camera, more of a faux documentary than a found footage film, as Johnson wisely includes shots of the film being edited on his home computer to show that the footage has indeed been formed to play the way it does. The film also features one of the best ending credit sequences onscreen this year.

The Dirties is not perfect, some of the bullies in the film are mere cardboard cut-outs of what you’d expect and deliver some wooden performances, but it shines when it focuses on our leading duo of Matt and Owen. The ending sequence is shockingly straight forward inaction but heart wrenching in its final moments. The Dirties is the type of film that seeps in and stays with you awhile, a highly accomplished first feature from director Johnson that ends up being one of the most frank, honest and definitive works on the subject of school violence.