END_OF_DOCUMENT_TOKEN_TO_BE_REPLACED

New this week on DVD and Blu-Ray from Alliance Films is the stop motion animated wonder, from the same studio that brought us Henry Selick’s Coraline, which scared up some decent box office this summer, ParaNorman. Directors Chris Butler and Sam Fell bring us the story of a boy with the gift to talk to the deceased and a mission to fulfill. So what does the DVD have in store for us? New on DVD from Anchor Bay Entertainment Canada, is an MMA inspired fight film that explores the seedy side of underground fight clubs, Brawler. Based on a true story, the familiar tale of brother versus brother, realized most recently onscreen in last year’s Warrior, is familiar ground. The real test of the film will be if it can deliver a realistic product inside the cage.

Brawler is the tale of two brothers, Charlie (Grubbs) and Bobby (Senter) Fontaine, who find themselves in a vicious, bone-breaking, jaw-smashing underground “fight club” circuit under Mafia control set on the riverboats of New Orleans. Sidelined by an injury incurred while protecting his young brother, Charlie is blindsided after a devastating betrayal by Bobby and his new wife Kat (James). The two… 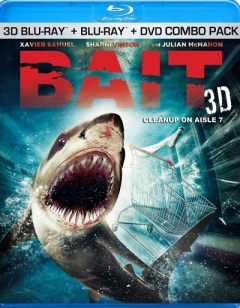 From the Gold Coast of Australia Anchor Bay Entertainment brings us Bait 3D on DVD and Blu-Ray. The film stars a cast of rising stars from Australia including Xavier Samuel (Loved Ones, Twilight Saga: Eclipse), Sharni Vinson (Step Up 3D, You’re Next), Alex Russell (Chronicle) and Phoebe Tonkin (TV’s The Secret Circle, Tomorrow, When the War Began). The cast is further rounded out with some veteran presence in the form of Julian McMahon. The question remains with the overabundance of Shark based thrillers out there is Bait more part Jaws or Sharktopus?