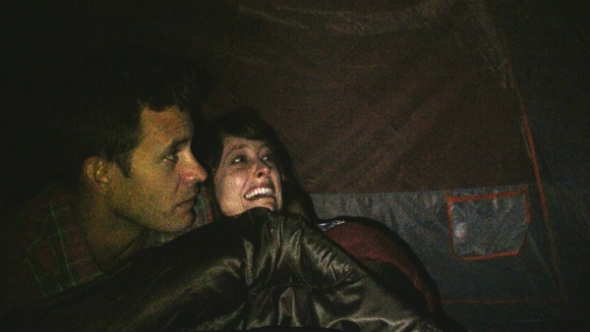 Straying off California’s “Bigfoot Scenic Byway,” Jim (Bryce Johnson)—an avowed Sasquatch believer—and Kelly (Alexie Gilmore)—his less-than-convinced girlfriend—take in the surreal sights of Willow Creek. The tiny community is a stone’s throw from where the infamous Patterson-Gimlin Bigfoot footage was shot in the 1960`s. After lunching on “Bigfoot burgers,” admiring comical murals and listening to balladeers celebrate the ‘squatch in song, the couple embark on an ill-advised venturing into the woods in search of the unknown. When they inevitably find themselves lost the beast of the forest quickly descends upon them.

Bobcat Goldthwait’s Willow Creek is quite the anomaly. The first half of the film is an almost excruciatingly paced examination of Bigfoot culture which features our leads wandering aimlessly performing interviews and filming first hand footage incessantly. No momentum is gained until the pair is in their tent, lost in the woods, and camped for the night. The following 19 minute steadicam shot (with only a single edit in the entire piece) is masterfully executed and directed, and it ranks among the tensest scenes of the year. The performances from Johnson and Gilmore sell the story perfectly here as their work is almost entirely ad libbed and totally believable.