We Are The Best is infectious fun

Director Lukas Moodysson adapts his wife Coco’s graphic novel “We Are The Best”, a story about three young misfits girls growing up in early 1980’s Stockholm, determined to start their own punk band. The trio consists of mohawk-sporting live wire Klara (Mira Grosin), her spiky haired best friend Bobo (Mira Barkhammar) and their newest recruit the shy, god fearing classical guitar-playing outcast from their school Hedvig (Liv LeMoyne).  Hedvig manages to help the best friends become competent as a band, despite having no instruments or discernible musical talent from the start. The trio eventually have their inseparable nature threatened by the discovery of some boys that share the same desire for punk music that the girls do.

We Are the Best relies heavily on the performances of its 3 young ingénues and the girls are up to the task. In particular Mira Grosin’s Klara is fantastic as a domineering personality that overpowers the shy and soft spoken Bobo, Grosin infects Klara with an unstoppable spirit that draws audiences in form the very start. It a very accomplished performance from a young actress, who like the rest of the trio of girls, is making her feature film debut. In an equally impressive yet completely different low key performance Barkhammar is perfectly cast as Bobo, the heart of the film and the character that goes through the biggest transformation, as she delivers real emotional impact with Bobo finally starting to ask and fight for what she really wants 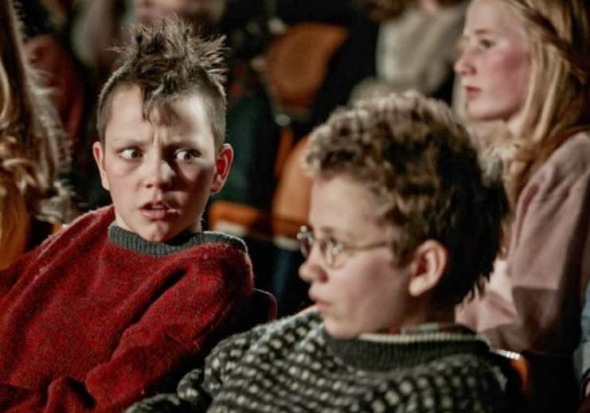 The film is also very heavily centred on music, the girls fight for rehearsal time and space at a local youth center with a hair metal band that has been playing for years, and features the band as they work through their uniting anthem “Hate the Sport”, a diatribe against their PE teacher. The song is very fun and catchy, but after hearing them work through it 10-15 times during the course of the film the audience will be longing for them to learn another song. The film does feature some other fine music from other Swedish based punk bands sprinkled through the film that add to the setting and environment the girls live in.

Not without its flaws as the film’s major conflicts do seem to be resolved too easily, though with the flippant and carefree attitude of the main protagonists it hardly feels out of place for them to change opinions and feelings at the drop of a hat. In fact it’s through these responses we are reminded to just how young these characters really are, as they spend most of the film convincing us they are well beyond their early teens. And by the end of the film, audiences will be won over. We Are the Best may not be the film of the year, but it’s certainly an early contender for some of the top 20/30 films of the year lists that will inevitably arrive come December.

This entry was posted on June 2, 2014 by moviejunkieto. It was filed under Reviews, Theatrical and was tagged with Coco Moodysson, Graphic Novel, Liv LeMoyne, Lukas Moodysson, Mira Barkhammar, Mira Grosin, We Are The Best.