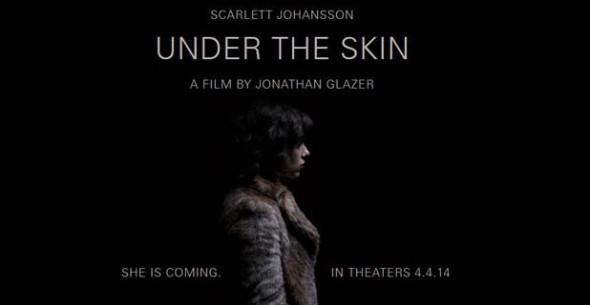 In Scotland, an alien life-form takes the body of an attractive young woman (Scarlett Johansson), and then proceeds to travel the country in a cube van seducing men.  As she lures her victims into a trap with the promise of sex, the men are deceived and abducted, never to be seen again. She is monitored by another alien, in the form of a male motorcyclist, who mops up any mess she leaves behind. After she takes pity on one of her victims and allows him to escape, she is forced to evaluate how much ‘humanity’ she possesses and whether she wishes to continue doing what she was brought to earth to do or to strike out on her own.

Under the Skin is one of the most unique and fascinating stories we are likely to see on screen this year. The film features a strikingly bold performance from Scarlett Johansson, a performance that is completely unlike anything she has portrayed before, and with her acting alongside mainly nonprofessional actors the weight of carrying the film falls almost entirely on her very capable shoulders.

This entry was posted on May 18, 2014 by moviejunkieto. It was filed under Reviews, Theatrical and was tagged with : Alien, Jonathan Glazer, Scarlett Johansson, Under the Skin.