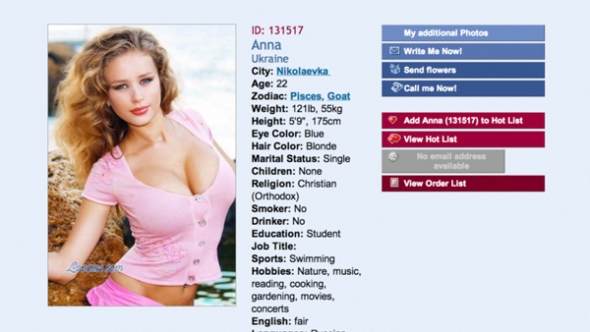 Love Me examines the Ukrainian mail-order bride business (which has gotten even more lucrative in the past decade) and the single men willing to risk their money to find companionship. The film follows 6 men of varying backgrounds and motivations and examines their relationship to the industry and the women they meet. The men take trips to the Ukraine where they encounter bombshells who cut straight to the point: they each want a man serious about marriage.

The 6 guys picked as the subjects for Love Me are very strategically placed to show the whole spectrum of outcomes of Internet dating, with some successful, some taken for a ride, and one in particular that’s to be a bit of a creep, yet he blames the women for not being interested.

Love Me keeps up a solid pace and gives us enough of a peek into all of these lives that it will keep the audience engaged. Using a mixture of crew and self-shot diary footage, director Jonathon Narducci has pieced together a continuous narrative that flows nicely and does not feel over stuffed despite the abundance of characters.  In the end the audience will not be sold on the inherently sketchy world of foreign brides, but perhaps they’ll walk away with a better impression of the type of people that desperately flock to these sights looking for love, and have some fun in the process.

This entry was posted on May 18, 2014 by moviejunkieto. It was filed under Documentary, Film Festival and was tagged with Hot Docs, Hot Docs 2014, Love Me, Ukrainian Brides.