Contest!!! Win a copy of Commitment on Bluray from Well Go USA 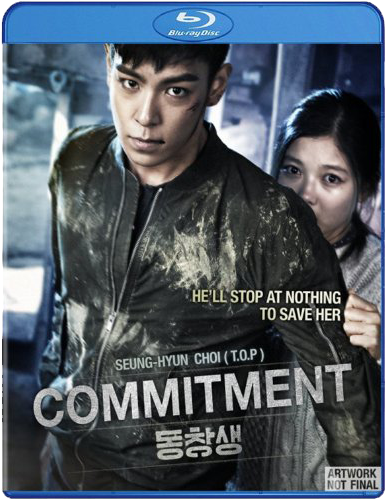 Well its contest time again here at the Fix and this time we have a K-Pop Superstar in the sizzling Korean spy thriller Commitment! The Korean spy/actioner hits store shelves this Tuesday, March 11th, and thanks to the amazing folks at Well Go USA we have 3 Blu-ray copies to give away!

Korean Rap/Pop Superstar CHOI Seung-hyun (aka  T.O.P of the K-pop boy band Big Bang) plays the son of a North Korean spy who decides to follow in his father’s footsteps in order to protect his little sister in the action-packed spy thriller COMMITMENT, debuting on Blu-ray™, DVD and Digital March 18th from Well Go USA Entertainment. While attending high school in South Korea, he rescues a girl (KIM Yoo-jeong) when she is attacked. South Korean Intelligence soon discovers the plot and begins closing in on him, while his own government sends a vicious assassin to eliminate him. Directed by PARK Hong-soo, the cast also includes HAN Ye-ri (Dear Dolphin, South Bound), JEONG Ho-bin (Shadowless Sword), and JO Sung Ha (Pluto, The Yellow Sea). Bonus materials include a behind-the-scenes “Making-of” featurette.

After his father’s botched espionage mission, North Korean Myung-hoon (CHOI Seung-hyun, aka T.O.P) and his young sister Hye-in (HAN Ye-ri) are sent to a labor prison camp. In order to save his sister’s life, Myung-hoon volunteers to become a spy and infiltrates the South as a teenage defector. While attending high school in the South, he meets another girl named Hye-in (KIM Yoo-jeong) and rescues her when she is attacked. South Korean Intelligence soon discovers the plot and begins closing in on Myung-hoon, while his own government sends a vicious assassin to eliminate him.

Fans of T.O.P, Big Bang and Korean action cinema in general should be all over this contest! And luckily we have 3 copies to give away on Blu-ray this time around, and here’s how you enter to win!

Winners will be picked and notified via message on Facebook after the contest closing date of  March 16th 2014!

Contest is open to readers from Canada and the United States only. Decision of the editor is final.

This entry was posted on March 7, 2014 by moviejunkieto. It was filed under CONTESTS, Home Entertainment and was tagged with Big Bang, Blu-Ray, CHOI Seung-hyun, COMMITMENT, North Korean, spy thriller, T.O.P, Well Go USA.