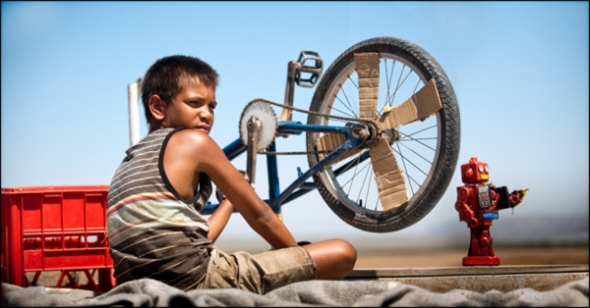 Abandoned as a boy and living with his grandfather, young Pete spends his days dreaming of his mother’s return and getting into all kinds of mischief with his best friend, Kalmain. Not a fan of his grandfather’s outdated ways, Pete bides his time until one day the land he lives on with his grandfather is bought by a mining company. Fearful that his mother will never find her way back to him, Pete and Kalmain undertake an arduous and dangerous bike journey across the western Australian Outback in the hopes of convincing the mining company to change its mind.

While the kids at the core of Satellite Boy are both precocious and talented, they’re sadly given very little to do through most of this meandering tale of adolescence. The film does crackle with energy in certain moments, like when the boys find water after days of wandering, which shows the chemistry and promise of what could have been if the entire film sported the same energy level. Fortunately, the third act once the boys reach the big city delivers some great emotional impact, as Pete must face some tough decisions that will impact the course of the rest of his life.

The journey can be arduous and challenging to get though, with many dry spots, but for those that stay with the film, the payoff is a satisfying and heart-warming testament to the adage that newer is not always better.

This entry was posted on October 18, 2013 by moviejunkieto. It was filed under Reviews and was tagged with Dork Shelf, ImagineNATIVE Film Festival, Satellite Boy.