Starting this weekend at the Bloor Hot Docs Cinema is the new documentary about the unsung heroes of the filmmaking process, the casting director, and the impact and evolution of the craft, “Casting By”. The film also serves to tell the story of the most influential and famous members of the casting world Marion Dougherty. In December of 2011, the film industry sadly lost Marion Dougherty and though most film fans would not recognize her by name; her work revolutionized the acting and casting industry.

Dougherty began her career as a casting agent in the 50s for a collection of New York based TV shows, including the Kraft Television Theatre, Route 66 and Naked City. During the studio era of film making that lasted into the early 60’s, casting was done by surveying the usual crop of studio-signed actors who were often given roles based upon their looks and personality versus their talent. However, Dougherty recognized that there was a large pool of actors in New York’s off-Broadway productions and acting schools and was the first person to cast unknown actors based upon character instead of appearance. But perhaps the best treat in this revelatory film is the massive collection of footage, screen tests and movie clips featuring legendary actors such as James Dean, Christopher Walken, Jon Voight and Maureen Stapleton, before their fame. 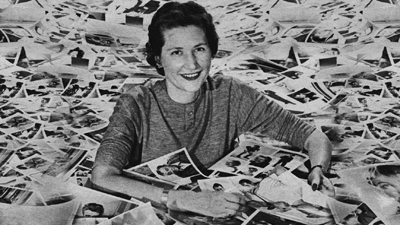 Dougherty was a visionary that had a special talent that allowed her to recognized greatness, many times before the actors themselves believed they could do what she knew they could. Among the multitudes that owe Dougherty their big breaks, many of whom appear in the film, are Al Pacino, Clint Eastwood, Robert Redford, Robert De Niro, Glenn Close and Dustin Hoffman. The film traces the start of Dougherty’s career back to the ends of the studio system, explaining how casting was done before there were independent casting houses, and follows the journey through to her eventual long run as VP at Warner Borthers studios. Along the way we are treated to antidotes and footage from Marion, her protégé’s and clients alike. The film also takes a look at the evolution of casting as a whole and spends some time with the New York based Marion`s LA counterpart Lynn Stalmaster.

The stories are great and the film keeps a brisk and engaging pace throughout. Most times the film has a triumphant and lively natured tone, but this is marked with a handful of touching and heartfelt moments that really hit home. Director Donahue packs the film with archival footage that must have taken years to track down, but the rare footage allows the people telling the stories to punctuate those tales with documented footage that backs it up. Some of the more touching parts lie in the quiet reflections we get from Dougherty as she revisits some of the films she made so great with her input on her television at home as Donahue lets the camera roll.

A fun and informative doc that highlights a true icon of Hollywood that has sadly passed away without the formal level of recognition she so richly deserved, Casting By is a real treat to watch. The film plays the rest of the week at the Bloor Hot Docs Cinema and any film aficionado, or fan of the medium, should put this documentary towards the top of their must see list.