Old friends Seth Rogen and Jay Baruchel get together for a weekend of video games, weed and rocking out to the Backstreet Boys. But after leaving Seth’s house to hit up a party at James Franco’s house, the pair, and many other celebrities are faced with the apocalypse. After the dust settles Rogen, Baruchel and Franco are left with Craig Robinson, Jonah Hill and Danny McBride. After barricading themselves in the mansion until help arrives, the real question becomes can they co-exist as their petty differences and cracks in friendship start to emerge.

The party that kicks off the film is a literal who’s who of the comedy world right now with all the cast listed above and even more appearing in brief cameos that turn this into the craziest house party ever. The usual stereotypes show up, the hammered inappropriate advances from the coked out Michael Cera, the drunken girl ramblings of the over sexed Mindy Kaling, the inebriated pontification coming from Jason Segel and so much more. After the party literally gets crashed the boys try to piece together what has happened, with Baruchel correctly coming to the conclusion that they have been caught up in the biblical apocalypse and the devil and his minions have assumed control of the world. The story is eventually forced out of the house where things get a little crazy, yet hysterically crazy. But the writing is strong and keeps the film running at a brisk pace, liberally taking jabs at the Hollywood system and everybody in the film, nobody is safe. 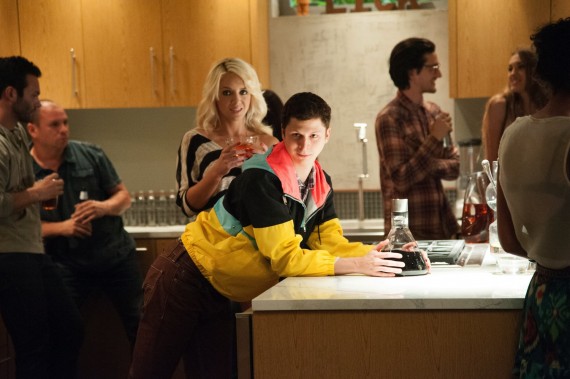 The guys are all pretty strong here. Baruchel, playing off his fiercely anti-Los Angeles reputation with aplomb, is gruff and irritable throughout most of the film, but also he also has many of the laughs at other’s expense. Rogen plays an affable version of himself, content to play along with everyone and just wanting everyone to get along. Franco is over the top obsessed with Rogen here, while contemptuous of another character, with many humorous results. Robinson and McBride turn in perhaps their best performances here as they slip into their personas effortlessly and the script plays up to their strengths. If there is a weak link it comes with Jonah Hill as alternates between the creepy close, almost like he’s portraying what he feels is a closeted gay male, behavior that only Hill and Rogen seem to find funny and outright hilarious sections, including one spoof of a popular movie that works very well. Michael Cera in a very small role knocks it not only out of the park, but out of the hemisphere, with one of the funniest self-portrayals ever put to film.

Rogen and Goldberg also surprisingly show an adept hand at directing action sequences as the set pieces here for the most part are staged very well. There is an attack in a kitchen that is excellently staged and another sequence in Franco’s basement that is a put upon ‘hero moment’ that plays out with laughs and even some suspense. The CGI work that dominates the second half of the film also works very well as the minions attacking on screen are well conceptualized and realized.

This Is the End isn’t a perfect movie, but it will likely be the funniest film we see all year. The skewering of everybody on screen is brilliant, and shows a lot of these actors have an ease at poking at their own reputations that is refreshing. The cameos, opposed to the extended ones at the party, hit the mark strong, especially the one right near the end and the one at the very end, and will make a second viewing to pick up all the happenings on screen essential. This will be a must buy when released on home video in the fall.