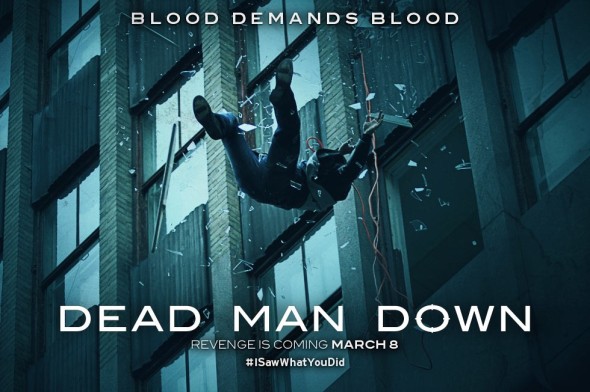 The newest theatrical release from the wrestling entity driven WWE Films hits theaters this weekend with the original Girl with the Dragon Tattoo herself Noomi Rapace leading the way in Dead Man Down. The film Reteams Rapace with the director of the original Dragon Tattoo trilogy for the first time since the worldwide smash as director Oplev is also making his feature film English language debut. But will Dead Man Down be a similar sized hit or dead box office? 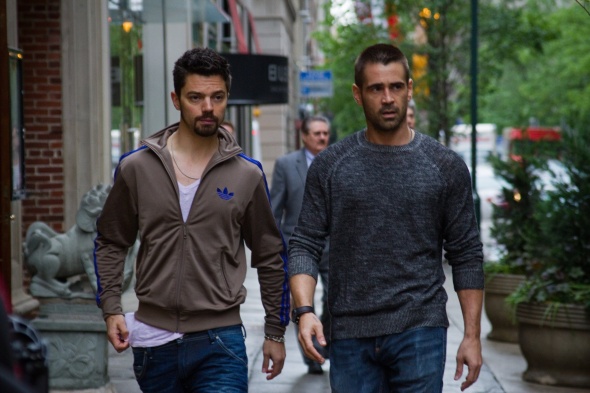 Victor (Farrell) is a rising gangland player in the crime empire run by ruthless kingpin Alphonse (Howard). But Victor has joined the gang fray with the single purpose of making Alphonse pay for destroying his once happy family unit and changing the course of his life forever. As he meticulously orchestrates his vengeance from his apartment Victor watches and is watched by Beatrice (Rapace). Beautiful, yet left tragically scarred, Beatrice is a mysterious young woman who lives in the apartment across from his. Though Beatrice appears meek and harmless, she seethes with a rage of her own. When she witness and uncovers one of Victor’s dark secrets she threatens to expose him unless he helps her carry out her own campaign of retribution. But Victor’s mission is one of brooding solitude and one he is prepared to not return from, until Beatrice attempts to bring him out of his darkest days with a reason to carry on. 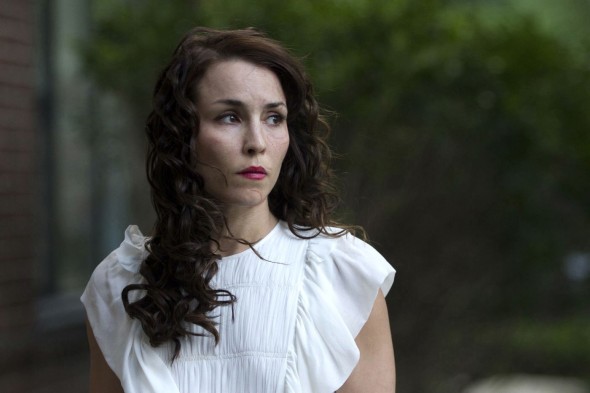 Dead Man Down is a terrible title, and the film is not much better. The script written by Wyman, a veteran of the TV series Fringe and writer of the much maligned Brad Pitt/Julia Roberts film The Mexican, is an over boiled and mostly uninspired crime tale that attempts to bring two lonely souls together through their shared desire for vengeance. Beatrice’s tale of a drunk driver  getting off with only 3 weeks imprisonment after her life altering accident takes the implausible leap of Beatrice determining she wants him dead for atonement. This motivation seems a bit far reaching and doesn’t bring much sympathy for her character. Victor’s tale of loss is nothing new, we’ve seen it before in many variations, but it does work better for motivational purposes at least.

Rapace and Farrell work with varying degrees of success on screen. Farrell’s moody and brooding silent treatment performance is pretty hit and miss and unfortunately dominates and overshadows most of the film. Rapace works much more effectively here, she manages to portray a scarred and wounded soul as easily as the make up on her face. Her emotion and pent up sexuality oozes forth from her as her Beatrice finally starts to feel attractive again. Howard is attempting to play the heavy with some sort of gravitas here, but the end result feels forced and sometimes downright silly. One segment in which he lays a trap to discover who is after him and killing his men in the process is supposed to play out as a suspense filled moment where we feel Victor may finally be outed and killed is laughable in its execution as the scene carries no stakes and feels awkward on all accounts. The rest of the cast are really not given much to do here, and because it is a WWE production we have Stu Bennett, aka Wrestler Wade Barrett, shoved into a small supporting role with less than 10 lines to entice the wrestling crowd to attend. Despite this Isabelle Huppert can’t help but come across as the most charming character in the entire film

The Action sequences are relatively well done, with a lot of gun play. The ending set piece however is quite awful. After Alphonse kidnaps Beatrice, Victor literally drives a truck haphazardly through the front of a house /mansion to get after them, with a couple of pounds of C4 plastic explosives that magically do not explode on impact but 2 minutes later when triggered. And after the blast the truck makes another appearance in 1 whole piece with only blast soot in the flatbed! Did 8 bricks of C4 just explode, or did a chimney sweep just finish his job?

Not the worst action film this year, that title still belongs to the terrible Stallone actioner Bullet to the Head, Dead Man Down definitely falls short of its target. The original Girl with the Dragon Tattoo was a film that featured an exceptionally strong female lead performance in an average looking and directed feature. This time around Oplev is missing the lead performance, but still delivers the average direction. Dead Man Down is a non-recommend.